What inspired you to become a chef?

Ariel Fox: Firstly, I grew up in very a robust Mexican community with a lot of immigrant farmers in California—primarily outside of Santa Cruz in Watsonville. My mother taught in the town and was a bilingual teacher. Pretty much everyone that I went to school with [when I was a kid] was from Mexico. This exposure to [immigrant families] is where I started learning about Mexican food and eating a lot of Mexican food. I would go to friend’s houses and eat the best fresh made tamales and posole. Obviously at this age I had no idea I was going to be a chef, but this is when I was introduced to those flavors.

I spent my summers traveling because my mom was a teacher. I didn’t realize at the time how unusual or special it was, I just thought it was the norm. Through traveling at a young age I was exposed to a lot of different cuisines. My parents also worked a million hours and would often get home late. By default we ate out a lot—usual three or more times a week. This gave me the chance to eat a lot of other things that “normal” kids weren’t eating—no five o’clock spaghetti dinners for me—and helped shape who I would become.

Then everything clicked. I started working on an organic farm as a part time job in high school. The lady that I worked for had me pick the vegetables and pack them up and bring them to the San Francisco farmers market. I ended up, coincidentally, selling produce to some of the greatest chefs in San Francisco—including Alice Waters. Learning about her restaurant and the culinary scene is what made me decided that I wanted to be a chef.

How and when did you start cooking Mexican food?

Growing up in California I was always eating Mexican food. It was the mecca for eating that type of food outside of Mexico. I didn’t start actually cooking Mexican food as a professional chef until I took over Dos Caminos though. Most importantly, this was why I took the position there and took over that project; it was that I had loved for so long and had never really officially owned it — in my own way. I wanted to take on that challenge and I felt like I had a lot to bring to the table even though I had not been a Mexican chef and I’m not of Mexican heritage. I felt like my childhood and my life experiences would give my food something unique—especially in a place like New York like California.

What type of Mexican food do you cook?

People always ask me what type of Mexican food do I cook—is it Tex-Mex, is it “traditional” or is it “authentic” Mexican. First and foremost, I have this aversion to the world authentic. What does that even mean? I wouldn’t say that my food is 100 percent traditional, in the way that it’s made. I do believe that what I make is authentic though, in the way that I use authentic ingredients methods and techniques. All of our sauces — from the mole to the salsa fresca—are authentic. My menu isn’t traditional though. There are classic dishes on there for the people that come to my restaurant for that—your classic poblano rellenos and enchiladas. But I like to have the freedom to take authentic Mexican cuisine and create a different style of dishes.

Have you been to Mexico before? When and where did you travel to?

I haven’t been to Mexico in quite some time. When I was little and my parents lived in San Diego we went across the border often—but just to the border towns. I’ve been to Baja and Jalisco as well, but I haven’t been since I’ve become a chef. I’d love to see it from a professional standpoint so I could really soak everything in.

I’ve honestly been dying to go to Tulum and the Yucatán. I’m obsessed with this restaurant—and everything that they do there—called Hartwood. The Yucatán is its own thing. It’s really different than all the other states. That style of beach cooking really speaks to how I grew up eating. Growing up near the beaches and going down to Columbia with my parents—my father is from Colombia—I would eat a lot of food that was similar to what they serve and cook there. It is the perfect marriage of Mexican food and Caribbean food from the islands. I want to go down there, ask them if I can work for free and just immerse myself in cooking the cuisine for a couple of weeks.

What is your favorite Mexican dish to cook? To Eat?

I love to cook meat—the longer and slower the better. Unfortunately you can’t cook meats—especially things like barbacoa—in a restaurant here in New York the way you would in Mexico. The challenge for me is to bring these styles of meats, and the styles of cooking them, the best way I can to this city. I’m constantly trying to find new ways to get pork to taste the way it does when it is cooked over wood and fire. You wouldn’t believe how many apparatuses I have or have tried to use in our kitchen [to get that flavor]. Cooking pork is my by far my favorite thing to cook, and to eat. They’re my two favorite things in life. I have a pork shoulder that I do—I wrap the ribs in banana leaves. It’s cooked for hours and hours and hours…then I char them on the grill and then I glaze them and bake them. It’s a process. But to me there’s honestly nothing better than really well cooked pork.

What was your first experience with tequila?

When I first started drinking there was Jose Cuervo. It was what you knew about tequila in college. That or Patron. The headaches and the smell of it still hurt me today just thinking about it. Tequila just wasn’t my jam for so long, I’ve only just started to slowly dive into it again. Now I’m trying to find tequilas that I can drink neat. That’s what I like about Hiatus; when I tasted it for the first time it was smooth and easy on the palate. For someone that avoided drinking tequila for so many years that was one of the first times that I realized that there were tequilas that I could drink straight.

For making a good, clean Margarita—no triple sec, a bunch of sugar or any of that fake crap—a Blanco makes the most sense. I usually have Reposados at the house because my fiancé is really into Reposados. I’m a Scotch drinker so I really like Añejos—especially with one rock [of ice].

What does Hiatus mean to you?

In the cuisine that I am working in, if you talk to any of the chefs that are my peers—like Alex Stupak or Chef José Andrés— they constantly get asked about the authenticity or traditional nature of their food. It gets so annoying after a while. For so long we’ve been stuck in this world where people are constantly judging what chef’s make, saying that it’s not authentic Mexican food, or that it’s not traditional Mexican food, or that you shouldn’t be making Mexican food if you’re not Mexican. I like the idea that I am in a “hiatus” with my cuisine. I don’t have to live in that world or cook with the mindset of what’s traditional or authentic because I’m going to squash that notion. I’m on a hiatus from traditional Mexican food. I’m living and cooking in my own zone. Come and enter my world.

When it’s the summer all that I want to eat is ribs and mac n’ cheese. So I put this dish on my menu where this stack of ribs comes out on a board and a side of this soft tamale corn pudding. It has the essence of a summer barbecue but it is also 100% “authentic” Mexican because every way that I’m cooking those ribs and that pudding are derived from ancient processes. So that’s what the word hiatus means to me right now: screw traditions and authenticity. It’s time to take a break from the norm and the expectations that people have about Mexican food. If you have the love and appreciation for where a cuisine comes from—how the ingredients are grown and how they were made in the past—you have a right to share what you want to do with it with the world.

Now available on Amazon Chef Ariel Fox’s genre-defying blend of fiction, memoir, and cookbook for kids, Freckle-Faced Foodie is about exploring passions, learning about your roots, and most of all, being proud of who you are. 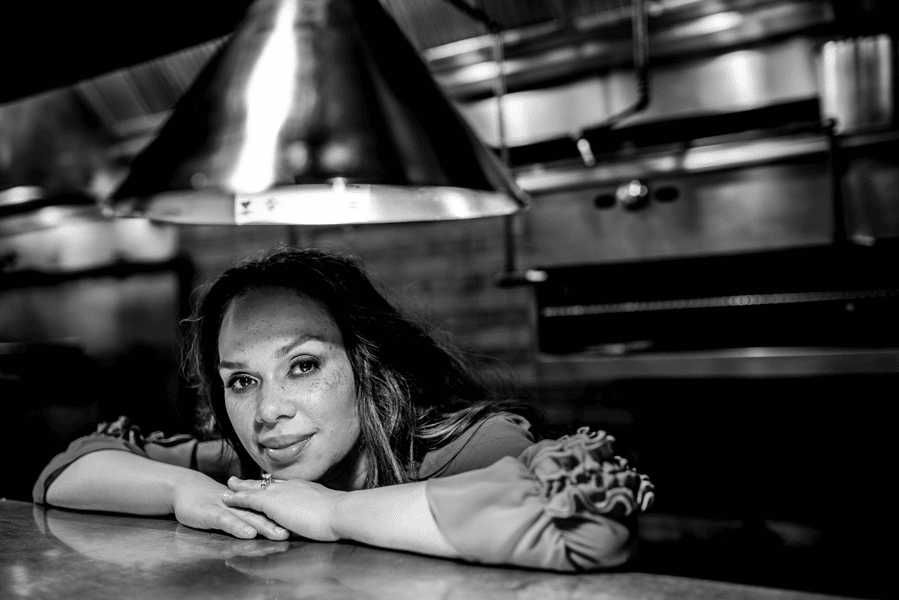 I am of legal drinking age

Please rotate your device to portrait mode to view the website